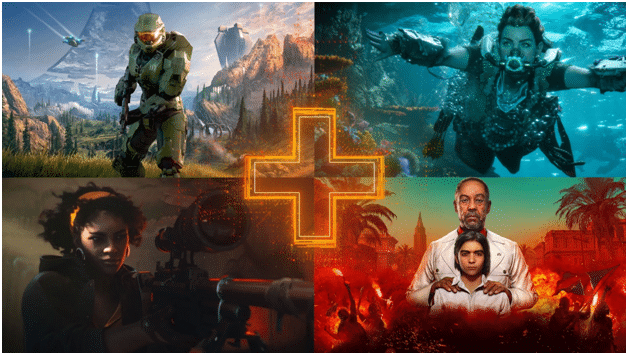 Best Online PC Games to play with Friends in 2021

We get it; with all the adrenaline-pumping variety out there, it must be a hard time picking an online PC game to be loyal to—there are just so many options available! And not only the AAA or Indie titles, but almost all genres are bubbling with thousands of different games to choose from!

There are certain games that manage to stand out from the rest. Even though all the highly rated online streaming PC games deserve a chance, there is only so much storage space or time to try out everything on the market.

So, how do you pick the PC game of PC games to download, play with friends during quarantine, and invest your time and energy in? Given that each game comes with gripping storylines and characters that pull you into their wondrous world, letting you experience adventures you never imagined encountering—it’s hard to make up your mind.

To help you make the most of your time, energy, and financial capacities, we’ve rounded up some of our personal favorite online PC games for you to enjoy alone or play with your friends. These games, according to us, are the best of the best and are guaranteed to make sure you have a great time!

Let’s talk about online game to play with friends on computer, these one by one in greater detail.

If you’re a fan of shooter games, this game will unquestionably grip you until your eyes are begging you to put the controls down and turn off the lights. Your character is supposed to defend London’s Piccadilly Circus as terrorists run left and right and your virtual world threatens to collapse from the booms of assault rifles and suicide vests.

COD: Warzone—caution: not for the faint of heart

In an ultra-HD marriage of gunplay, graphic elements, and intense battle, this battle royalegame should come with a warning—“play at your own risk.”The gameplay is tense, adrenaline-pumping, and comes with a rather strange sort of thrill—the type that will have you get killed over and over again while you try to win.

A uniquely gripping play that will make sure you’re gasping and out of breath when you’re finally done with it, if you’ve got pent-up anger that needs to come out, by all means,annihilate the game.

Now, DOTA is not a new game. However, the stunning graphics, the incredible storyline, and the brilliant gameplay just keep getting more and more popular around new and old gamers alike. And even after several years of being on the market, this one is still one of the most in-demand games of 2021!

The game borrows the completely boastful scale from Skyrim. Itartfully pairs it up with the depth, thrill, and exhilarating spirit that most gamers still associate with grand theft auto and gives you a beautiful new play that can be enjoyed almost endlessly.

The game comes with so many features, striking the heartstrings of players so remarkably that the game manages to stay with its player for long after it’s over. In a way, it would be an understatement to say that DOTA is one of the best online PC games of 2021, wherein fact, it wouldn’t be wrong to assume that it is undeniably one of the best games in the history of PC games.

If you’re finding it hard to believe why League of Legends is in our list of the top online PC games to play in 2021, a look at its creative gameplay will settle your suspicion. Developed by Riot Games, it is packed with intensely creative elements and showcases commendable attention to detail. This game lies in the action-adventure genre and lets its players experience vibrant, brilliant graphics, a gripping storyline, intuitive design, and incredible performances.

During the League of Legends gameplay, players are supposed to work with their teams to take down the enemy Nexus before the opposing team succeeds in breaking theirs. That being said, the difference between skilled “LoL” players and novices is that skilled players are familiar with the ins and outs of the game and find it easier to achieve these targets—all while keeping up to date with all the macros of the situation to lead their team to victory.

Love soccer? With Rocket League, you’re truly in for a treat! As a vehicular soccer video game put together by Psyonix,this game was released many years back for Windows and PlayStation. Then later, ports for Xbox One and Nintendo Switch were added to enhance the user experience further.

As a high-powered combination of arcade-style soccer, and absolute vehicular pandemonium, coupled with swift, easy-to-grasp controls, and smooth gameplay, this is for sure a game sports fans should not miss.

Battlefield Hardline is the first stand-alone game release in years developed outside of the games’ parent company, DICE. This one is created by Visceral Games, a single-player shooter game—a huge departure from Battlefield’s previous multiplayer releases.

The focus on only one player has allowed the game creators to maximize the possibilities and experience, honing in on bullet physics, positionings, and making the environment feel more realistic.

But that’s not all. Perhaps the most significant difference between Hardline and previous game releases are the very obvious non-lethal takedowns. Hardline comes with its very own arrest mechanic that will let you slowly sneak up on your enemies, whip out your badge and have them automatically surrender.

This added sophistication lets your arrest more suspects in Hardline than you would have in the same time window in any of the previous versions.

Ready to try your hand at the all-new shooter game experience? Battlefield Hardline is a very safe starting point.

FIFA 21—a football game for the megafans

FIFA 21 comes with certain strengths that simply can’t be ignored. For example, the new player renders appear to be much stronger than the previous versions, providing an overall better game experience. Another hugely noticeable change is the much more fluid gameplay than the older version. There is a drastic improvement in the flow of action; the runs feel smoother, much more put-together, and a lot more alive. Not to mention that passing and tackling in the FIFA 21 have a lot more return in experience, providing the best gaming experience since the FIFA 17.

When talking about the passing and the precision of it, the gaming experience offered by the FIFA 21 has a lot more mechanics put in play and feels a lot like Playmaker control in Madden. All it takes is a flick of the analog stick to send a player flying in a certain direction. You can also pretty openly and easily deliver accurate passes for better scoring.

Although FIFA 21 comes with certain staggering drawbacks, like the animations in Volta not being strong or ‘alive’ enough, and the game suffering from a lack of customization, the new version offers more pros than cons which is why we still regard it as one of our top online PC games to play in 2021.

Mortal Kombat 11—the lust for gore ends with this one

As gory as it gets, the fans of the Mortal Kombat franchise found it easy to switch over to the 2018 release of the 11th version given the enhanced graphics (read: gorier than ever), brand new fatalities, and the new characters.

Branded as the audacious fighting game “where you rip people’s heads off”, Mortal Kombat 11 allows its users every bit of digital gore as possible. As one of the most fully-featured fighting games fans of actionplay can buy, if you have bloodlust in your system, you won’t be going wrong with it.

Having first being introduced around 29 years ago as a 2D fighting game, Mortal Kombat has sure evolved into a behemoth of its own, bent on dominating the action game market for a long time. There is simply no beating it.

Now, we know that games are fun, but sometimes players cannot enjoy them to the fullest because certain servers aren’t available in certain countries. If you’re facing this issue, a simple way to solve it would be to use a VPN and connect to the internet via remote servers.

Even though we’ve only short-listed four of the dozens of games that are fun to play, we would recommend pushing your boundaries of preferences and exploring the plethora of new games when you’re done with these. Who knows, you might find one that tops this list! And when you do, don’t keep it yourself—comment down below and fill us in!

How to Play Fortnite on PC – Easy Guide for Beginners!