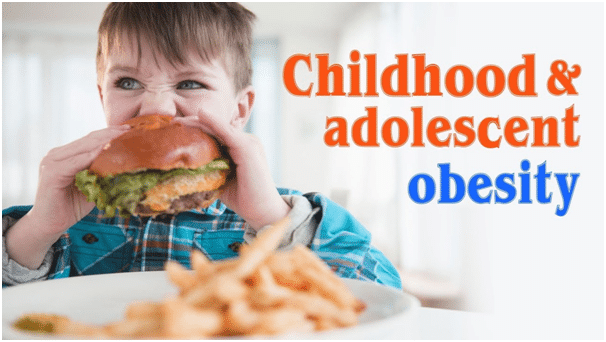 Obesity is no longer just an aesthetic problem, which is uncomfortable because of the “joking” of friends. Excess weight can cause the appearance of several health problems such as diabetes, heart problems and malformation of the skeleton.

About 15% of children and 8% of adolescents suffer from obesity problems, and eight out of ten adolescents remain obese in adulthood.

Children in general gain weight easily due to factors such as bad eating habits, genetic inclination, sedentary lifestyle, psychological disorders, problems in family life, among others.

People say that obese children eat a lot of food. This statement is not always true, as in general obese children use high-calorie foods that do not need to be in large quantities to cause weight gain.

Below, we tell you some causes of childhood obesity and some prevention. Read on!

As an example, we can mention the famous sandwiches (hamburger, mixed-hot, cheeseburger, etc.) that moms love to prepare for their children’s snack, the fries, the steak passed in butter are the real villains of baby food, coming against to the staff of the health team who condemn these foods exposing the dangers of poor diet to parents where some still think that a healthy child is a fat child. Children also tend to imitate their parents in everything they do, so if parents have bad eating habits, they end up inducing their children to eat the same way.

The sedentary life facilitated by technological advances (computers, television, video games, etc.), means that children do not have to physically strain at anything. Nowadays, unlike some years ago, children due to urban violence and at the request of their parents, stay indoors with activities that do not encourage them to do physical activities such as running, playing ball, playing pike, etc., Ad they spend hours sitting in front of a TV or with their smart devices in their hands. This leads them to a sedentary lifestyle.

To cater it, parents are needed to control their screen time, and for that, parental apps such as FamilyTime help a lot. Using the app, parents can limit their kids’ screen time and implement remote screen locks on their kids’ devices. Not only that, they can schedule auto screen locks too. If you want to see how to do these locks work, give FamilyTime app a try for free. You can get the trial version of the app from the buttons below:

It is not just adults who suffer from anxiety caused by everyday stress. Young people are also targets of this symptom, caused, for example, by concerns during exam weeks at school or by the tension of the entrance exam, among others. Anxiety makes them eat more. It is like compulsive eating, without hunger.

Psychiatrists affirm that behind an obese person, there can always be a psychological problem, worsening due to our culture where society excludes fat people from various games due to their situation. This only leads the child or adolescent to get worse because they are almost always shy and feel ashamed, they end up isolating themselves and making food an “escape” from reality, that is, the more rejected, the more anxiously they eat.

People with symptoms of depression suffer changes in appetite and may lose weight or gain weight. Some research has shown that a depressed person usually does not practice physical activities and eats more sweets, especially chocolate.

Some research has already revealed that if one parent is obese, the child has a 50% chance of becoming overweight, and if both parents are overweight, the risk increases to 100%. The child who has obese parents is at risk of becoming obese also because obesity can be acquired genetically.

Have you ever paid attention and that there is always someone chubby in your class or among your friends in the neighborhood? This indicates that obesity is an increasingly present risk in the lives of young people today, which is very worrying.

Prevention is the keyword to prevent obesity. Here are some tips recommended by doctors and nutritionists to prevent this disease and have a healthy life.

Obesity is a serious problem and must be treated with care. If you are or know someone who is overweight, you should seek medical help, as the causes of obesity can have different origins from irregular habits to genetic and hormonal factors. The sooner you are treated, the greater the chances of a cure. But don’t forget that the most important thing is to be at ease with ourselves. Having a cool body depends on emotional balance and a conscious mind.